“Bring a stick”, advised No.2 Son, temporarily resident in Chaoyang District, “We’ll be doing a lot of walking”.  And we did!  Sidestepping hundreds of tour groups dressed in matching colours, guides holding identification flags aloft, we climbed up steps and down, into and out of courtyards in The Forbidden City, Lama Temple and The Temple of Heaven.  In taxis, unconcerned drivers wove their way randomly between lanes in streams of traffic, never considering vehicles at the rear – “Not as bad as Vietnam!” Son remarked.  We fought our way through throngs to Tiananmen Square and the Summer Imperial Palace where, blissfully, we escaped the crowds by pedalo-ing to the middle of the Lake, there to float, aimless and dreamily.

Group tours were discounted in favour of more pleasurable personal discovery, of the widest variety of cuisine in smart restaurants, for example.  Avoiding delicacies such as donkey, dog and bullfrog, we plumped for tasty, surprisingly cheap, Peking duck in plum sauce, Kung Pao chicken with peanuts and chili, egg-fried pumpkin, sweet lotus root, spicy string beans and pancakes.  We warmed to the taxi driver who, having guessed at first that we were Italian passengers, rifled through his CD collection to play “God Save the Queen”.

In Wan Fu Jing’s hutongs we declined the offer of a fry-up of the best of their wriggling, impaled scorpions; 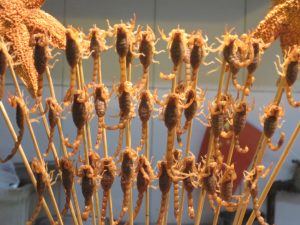 we luxuriated in pre-pedicure sleep-inducing foot massage in Lady Street Market’s underground maze of beguiling stalls laden with bargains; and we delighted in visiting high quality shops and exhibitions in 798 Art District, all the more striking for its location in an area of disused, rusting factories.  An unexpected joy was coming across a small, ageless, always-smiling street seller, known affectionately for his incense-filled baubles as ‘Smelly Balls’, who also crafted grasshoppers and frogs out of reeds.  It would have been unthinkable to leave without sampling the famous Silk Market’s exquisite wares where, on my behalf in halting Chinese, Son haggled to purchase, with others to bring back as gifts, the world’s most beautiful silk scarf, beating the seller down to a fifth of her original asking price.

You see no chewing-gum on the pavements but Chinese men spit and they smoke, heating is not provided or turned on until 15th November, babies have no nappies – their clothing has slits at the back – and are age one as soon as they are born, ‘squat’ toilets are the norm, there’s no concept of queues and it’s every man for himself. 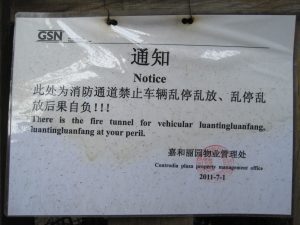